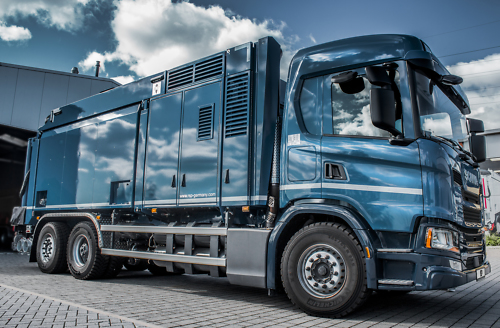 RSP commissions the first suction excavator with gas-fuelled engine to a French customer.

Cooperating with the long-standing customer Noblet Paris Ouest, RSP commissioned the first suction excavator with exclusively gas-fuelled engine in the company's history. "We are very happy and quite proud of our latest development. Many colleagues engaged themselves in the project and contributed to the successful outcome. In this way, we extend our know-how as well as strengthen our position on the market - even in such difficult and challenging time. Something that I am particularly pleased about", say the RSP CEO Jens Graber.

And even in the French capital that has already experienced all kinds of exciting events on her boulevards, you can be sure, this blue RSP-suction excavator of type ESE 6 RD 6000 attracts attention whatever the application might be. We may assume that in rare cases only such big and at the same time, low-noise vehicle was on the road. Creating this heavy-weight of 22 metric tons, three-axle vehicle, RSP has successfully taken the next step with the development of environment-friendly drives of suction excavators meeting the actual challenges of our time as regards sustainability, reduced emissions and resources-saving application.

Not to forget the necessary extra work we invested into the production before the final commissioning to the customer: In the RSP-main factory in Saalfeld, at first we had to intensively train the involved employees on the work with gas-driven vehicles - even before they were permitted to turn the first screw on the tractor truck.

During the real vehicle assembly, the permanent ventilation had to be maintained and the gas content around the vehicle measured several times a day to prevent building up dangerous gas-air-mixtures. Finally, after completion, a two-month trial phase was initiated in the works to test the operation of the gas-driven suction dredger to large scale in order to be able guaranteeing maximum safety for the customer after commissioning.

In reality, RSP had already been prepared for the introduction of an exclusively gas-driven suction dredger, but the chassis producer had not been in a position in the development phase imparting gas-fuelled drives that power comparable to up-to-date Diesel engines: "This matter had already been on the table for some time and 2017 the first RSP-suction excavators with alternative drive were launched. Before that date, however, the gas-fuelled drive was retrofitted after commissioning. For power-related reasons, a hybrid of gas-fuelled and conventional drives had to be installed," remembers the RSP CEO Patrick Renger.

This situation has changed at the latest now with the new development of the OC13 101-tractor truck of the Swedish manufacturer Scania. 410 PS (301 kW) and 2,000 Nm of torque now drive both the engine and the double fan of the RSP superstructure via PTO and in this way, enable the power supply of the suction equipment. Even when sucking by gas-fuelled drive, earth and rock pieces weighing up to 120 kg can be loaded into the six cubic metre trough. Just a single tank filling only allows for permanent operation over six hours  due to 160 kg of compressed natural gas (CNG) aboard providing for a maximum possible CO2 reduction that emits less polluting fine dust, not only at the sites of operation but also for the local residents.

Figure: Taking a view from outside, only the gas tanks between the axles reveal that this suction excavator of type ESE6 distinguishes from all its predecessors. Due to the gas-fuelled drive of theScania chassis, the suction equipment can be operated considerably more environment friendly but just as effectively. | Photo: RSP